Turns out, there is a CSGO Wallhack Bug, no hacks needed to use this cheat. You can see through walls to see your enemies, via their silhouette. Under normal circumstances we might consider this a bit risky, and if you would believe other websites, they tell people not to use it, but we believe that its not really a risk factor. It will be too hard to prove. 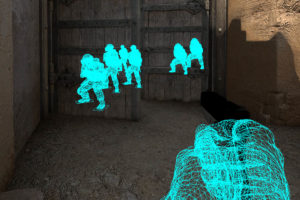 Under normal circumstances, we would reserve this for our VIP Members, but because this is a known game-breaking potential bug, we think it will be fixed in a manner of days. As such, you will get to see this, along with the rest of the world, for free - until it is fixed. As always, have fun!

He mentioned that the video was found by the Russian community. “Game-breaking bug in CS:GO. “There is a ‘legal wallhack’ that works when you look through the light bulb on the bomb.” he said.

As you can see in the video below, two terrorists were next to each other, and the player with the bomb on his back was looking to the ground while crouching. The other one was looking at the light bulb on the bomb, which reveals the silhouette of the enemy who was standing on the other side of the wall.

We don't really think this will result in a banhammer, but all things are possible, so use with caution. The main thing about this, is that it's very difficult to prove the use of this CSGO Wallhack Bug or that it was intentional. Knowing that someone is cheating and proving it are 2 entirely different things.