One such Atlas Empires Fatal Mistake when playing the game, is how you set up your base. This piece of information is very important to both noobs and advanced players, alike. As you play of course you will notice less and less of the players making this mistake, but you get to earn it now instead of later after trial and error. 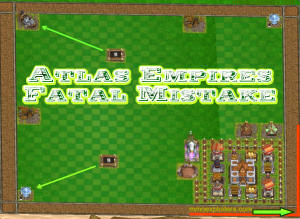 One thing that I have noticed when it comes to setting up a base, is the common belief that you need to put all your buildings clumped together, and that most people think that putting their base in a corner will protect them, making 2 sides much more difficult to attack. This is actually a common problem with those who have never attacked someone who does the same with them.

So why is putting your base in a corner, an Atlas Empires Fatal Mistake? Its actually pretty simple, you can put down troops, in that farthest corner. Those troops can then attack anything that is in that corner, easily. That doesn't mean we can't defend against it. But it does mean you need to take more care setting up your base, and placing walls and a turret or cannon within reach of that corner is important.

On that note, I do want to mention that you can in fact place your base against the side, but even the side can have troops attack it (see red lines on above image). You can still put troops on the side where there is a path. So its important if you use that method, to still put walls and turrets there.

There is however a secret. If you heavily defend your base, the best overall place to put your base, is still however a corner. Once you account for putting walls and turrets or cannon shots in and around, with an easy reach, its still the best place, and not in fact an Atlas Empires Fatal Mistake. The reasoning is simple. In order for an enemy to completely dominate you, they need to decimate all of your buildings. I like to space mine out. If you put a few in the far corners of your map, it makes it so the enemy cannot do a 100% base kill. They can however get 2 stars. By the time they realize there are buildings in the farthest reaches, it might be too late for them to get 3 stars as there is a time limit to finish each battle. Personally, I prefer to put my stone in the corner, as the troops which are sent to attack those outreaching supplies, can't attack your base, and stone is the one I usually have the least of.

Useful Tip: If you want to buy something in the game, you can get a free PayPal Giftcard for $100 - just by filling out a survey!

If you found this guide on Atlas Empires Fatal Mistake helpful, please bookmark and share this guide. We will be posting more guides for Atlas Empires (and other games) in the coming days.