I learned the old gold farming method no longer works, and I needed to find a New Gems of War Gold Farming method. I logged in yesterday, the first time in a few months due to watching the political furor and COVID-19 in action. Reading the news has been my staple for many months. Anyways, I started my own guild finally, and prepared to farm some gold in Gems of War.

To say that I was shocked that the old gold farming method no longer worked, was indeed an understatement. I used to do the daily quests, the dungeon daily, and 3 runs in the underwold delving the thieves guild. All told I spent about 1-2 hours, if I had some left over time, I might even do some PVP or Guild quests. These acts netted me at least a million gold every week to put into purchasing gems and other items in game in the guild tab. Alas, I still do some daily quests, I also do the dungeon runs, but hitting up the Thieves Guild is no longer an option. Not only did they nerf the gold collection, but they also nerfed my gold farming team.

Now to me fair, I had heard that using a gold farming team and doing level 8 explores was the way to go. I did try that team, but it was very slow going. There was a lot to be desired, and in the end I chose to go a faster method, but harder levels to make up for the lack of farming. If you do want to go that method however, its Corsair, Double Cedric, Skeleton Key, and Egg Thief. Like I said, it was just too slow for me. It take a while to max out gold, and then you have to wait till the Skeleton Key is at max gold to strike.

So with my New Gems of War Gold Farming method you're probably wondering what kind of team I bring to the table. Strangely enough, I am not doing a thief nor am I run a Corsair team, in fact I have turned to my OP PVP team. Instead of farming gold in the Thieves Guild, instead I moved on over to explore.

Sentinel - The important talent is Rock Solid, as well as Get Behind Me. However any class with Rock Solid can be used as well, but works especially well with a brown mana weapon. Alternatives might be any that use the Stone talent tree. 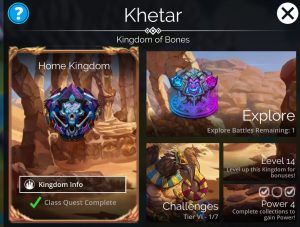 As you will be able to see from the above video, I farmed an explore at level 11, the mobs were much higher levels and damage, and I was able to net almost 2500 gold in a bit under 4 minutes. I am doing the same gold that I netted from a thief team, but the one which people suggest versus this New Gems of War Gold Farming method, takes much longer to farm. I am sure as time goes on, I will be able to play much higher levels, and get much better results, as I will also be able to farm the mini bosses and the big bosses. After all, this was just one quick battle. Of course one thing I did learn, is that the battle took longer, since I went up against undead, which were immune to death mark. Next time though...