Any time there is a Free WoW Bot, its instantly popular and considered newsworthy. This is because most bots, while in development often cost money. 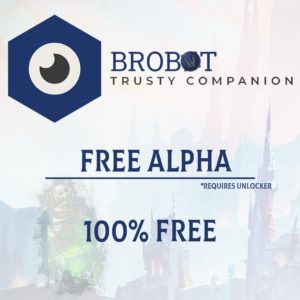 These days, bots come and go, and you never quite know if the bot that is in alpha or beta is going to stick around, while you send them money for a lifetime account. That is to say that many of them pop up, collect funds, and then disappear along with your money sent. We are happy to announce that you can try Brobot alpha release free - while its still in Alpha release.

We like this Free WoW Bot because its not just a leveling machine. While it will cost you monthly when it finally has a release candidate, we can tell you that the costs won't be great. It will run between $10 and $20 a month. But when you consider that either Dugi's Leveling Guide or Zygor's Leveling Guide will cost you around the same price, and require you to do much of the work yourself, I am sure that you will see why we like botting instead.

I like leveling up by hand one or two characters. I quite literally hate to level up my 8 characters on my main server. Then there are my other 5 alt characters on other servers.

Another reason why we like BroBot is it is feature rich, meaning that it covers not just leveling, but also questing, Dungeons, Gold Farming, Professions, and also does both PVP and PVE spell rotations. Ultimately, the choice on how to use this Free WoW Bot, will be up to you. Click Here to get the free trial.